We’re currently spoiled for choice in the budget and mid-range smartphone space. There’s no shortage of options, but at times, too much choice can be a bad thing. Realme, for instance, currently has multiple variants of the 6 Pro, X2, XT, and X smartphones retailing between Rs. 15,000 and Rs. 20,000. There’s a lot of overlap in terms of pricing between the models and their features, making it even harder for customers to make a buying decision.

Today, we’ll be focusing on two of Realme’s most recent offerings — the 6 Pro and the X2. Both phones are priced starting at Rs. 17,999 and share similar features such as a 64-megapixel primary camera, powerful 700-series Qualcomm SoCs, and very fast charging. Of course, there are some features unique to each smartphone which we’ll take a look at in more detail in this comparison.

We understand that you can’t buy either of these phones right now due to the lockdown, but when services do resume eventually, which one of these smartphones will offer better value? Let’s find out. 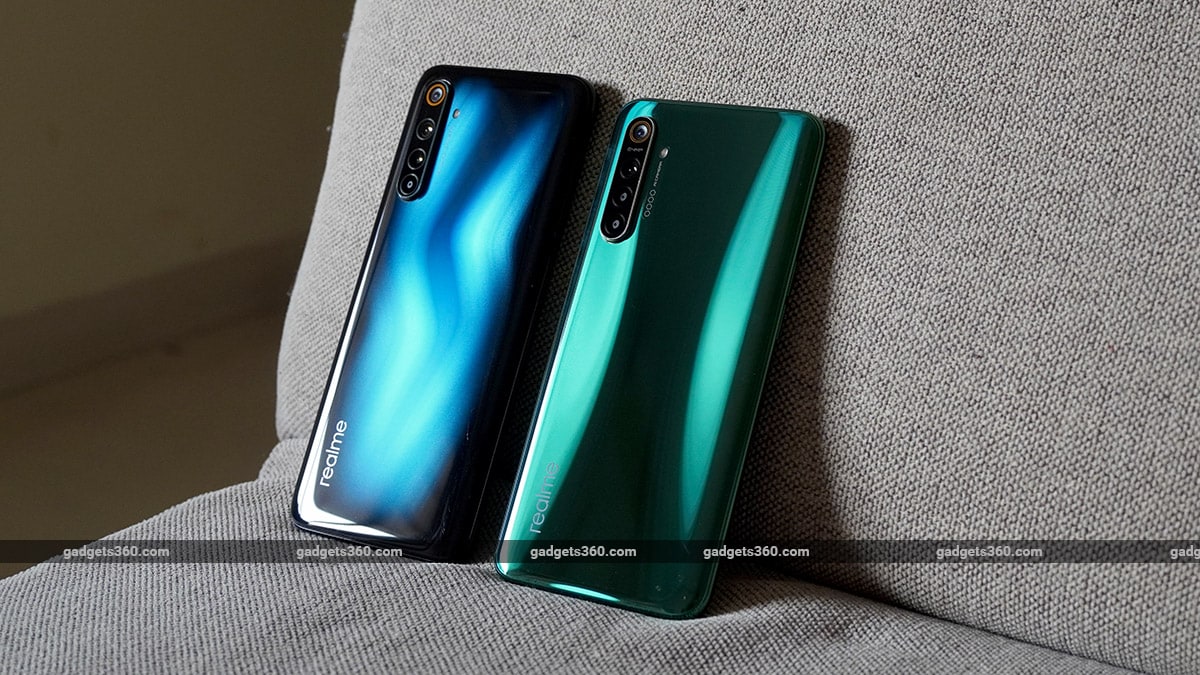 The Realme 6 Pro and X2, both have interesting patterns on their backs

The Realme 6 Pro and the X2 both have polycarbonate bodies with Gorilla Glass on the front and back. The build quality is very good, and both phones look striking thanks to the unique, light-reflecting patterns on their backs. The X2 comes in three colours with wormhole-like streaks on the back, according to Realme’s description, while the 6 Pro has a lightning-inspired pattern and comes in two colours.

The Realme 6 Pro is a little larger and heavier than the X2, and has a slightly bigger display. Due to this, the Realme X2 is a tad easier to manage when held in one hand. Both phones have a single speaker at the bottom, along with a USB Type-C port and a headphone socket. Button placement is similar, and both phones also offer provisions for two Nano-SIM cards and a microSD card.

The rear camera placement is virtually identical on the 6 Pro and the X2, however, it’s a bit different for the selfie cameras, which we’ll get into in the display section.

Going by physical design alone, it’s hard to pick a clear winner. We’re leaning more towards the Realme X2, simply because it’s slightly slimmer and easier to manage for everyday use. However, if you’re used to big phones, you shouldn’t have any trouble with the 6 Pro.

The Realme 6 Pro is powered by the newer Qualcomm Snapdragon 720G SoC, while the Realme X2 uses the Snapdragon 730G SoC. Both are octa-core processors, built on an 8nm fabrication process, and feature the same Adreno 618 GPU. However, there are slight differences. On paper, the Snapdragon 730G SoC should be slightly more powerful due to its Kryo 470 cores, compared to the Kryo 465 cores in the 720G. On the other hand, the 720G has Qualcomm’s newer Hexagon 692 DSP and also supports India’s NavIC satellite navigation system, which the 730G lacks. Both phones use LPDDR4X RAM and the flash storage format is UFS 2.1.

The Realme 6 Pro has a capacitive fingerprint sensor, unlike the X2 which has an in-display one

Looking at benchmark performance, the Snapdragon 720G-powered Realme 6 Pro actually managed better scores in some tests compared the Realme X2. In AnTuTu, the 6 Pro scored 2,83,22 points, compared to 2,75,686 points from the X2. Similarly, in Geekbench’s single and multi-core tests, we got 569 and 1,570 points respectively from the 6 Pro, compared to 547 and 1,616 points from the X2. The 6 Pro scored 16fps in GFXbench’s Car Chase test, while the X2 scored 15fps.

Real-world performance was very similar. General usage was snappy on both models and multitasking was handled well. Both phones are also capable of handling any type of game with ease. From simple titles to heavy games such as PUBG Mobile, all run very well without a hitch. Excess heat is also handled very well as neither of these phones got overly hot when gaming even for extended periods of time.

One of the biggest differences between these two phones is with their display panels. The Realme X2 uses an AMOLED panel, which allows it to achieve rich colours and deep black levels. This has also allowed Realme to use an in-display fingerprint sensor for authentication. The Realme 6 Pro on the other hand uses an IPS LCD panel, which also has good viewing angles and colours, but with slightly less saturation. Realme has had to go with a side-mounted capacitive fingerprint sensor in the power button, since an in-display one won’t work with such a panel. It feels as equally quick and we didn’t have any issues with either one.

There’s also a difference in the display cutouts. The X2, being a slightly older model, has a more traditional notch at the top of the display, while the 6 Pro gets a more premium looking dual hole-punch cutout for its two selfie cameras.

Watching videos is fun on both phones but the Realme X2 does provide slightly richer colours and is a tad brighter than the 6 Pro. Both phones are Widevine L1 certified, which means they are capable of playing HD or higher resolution videos in streaming apps such as Netflix. Audio quality is very similar across both phones and it’s really hard to pick a single winner. Both have Dolby Atmos enhancements, which is on by default. The sound is rich and loud, with good details for vocals and the mid-range. 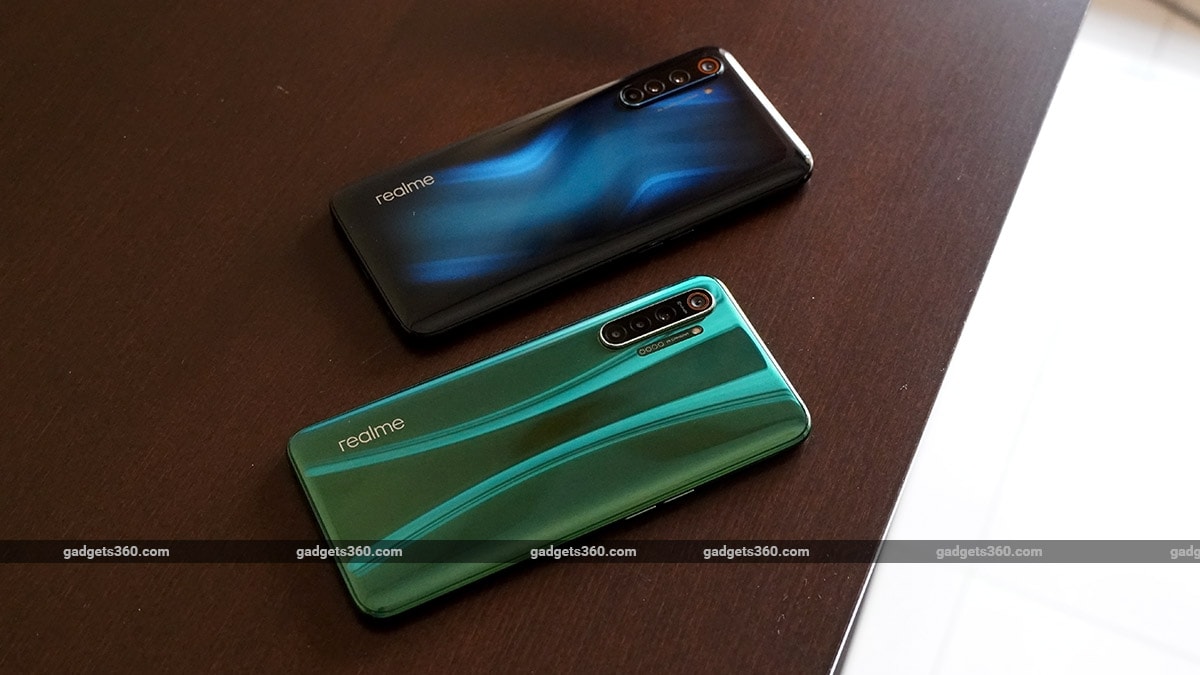 The Realme 6 Pro has a slightly larger 4,300mAh, compared to the 4,000mAh one in the Realme X2. We noticed a big difference in runtime for our battery loop test, though. The X2 ran for just over 13 hours, while the 6 Pro ran for nearly 22 hours. To be fair, when we tested the X2, it was running ColorOS 6 based on Android 9, while the 6 Pro was running on Realme UI based on Android 10. With actual usage, both phones will easily last for a day and half before needing a charge, which is a good thing. There’s 30W VOOC Flash Charge 4 technology in both phones too, which take both batteries from zero to above 90 percent in an hour.

The Realme X2 and the 6 Pro both have the same 64-megapixel Samsung GW1 sensor for the primary camera, plus an 8-megapixel wide-angle camera and a 2-megapixel macro camera. The fourth camera on each phone is a bit different. The X2 has a depth camera, while the 6 Pro has a 12-megapixel telephoto camera. The selfie cameras are also a bit different. The X2 uses a 32-megapixel sensor, while the 6 Pro has two selfie cameras — a 16-megapixel primary sensor and an 8-megapixel sensor with a wide-angle lens. Both phones have the exact same camera app, with the same shooting modes and features. 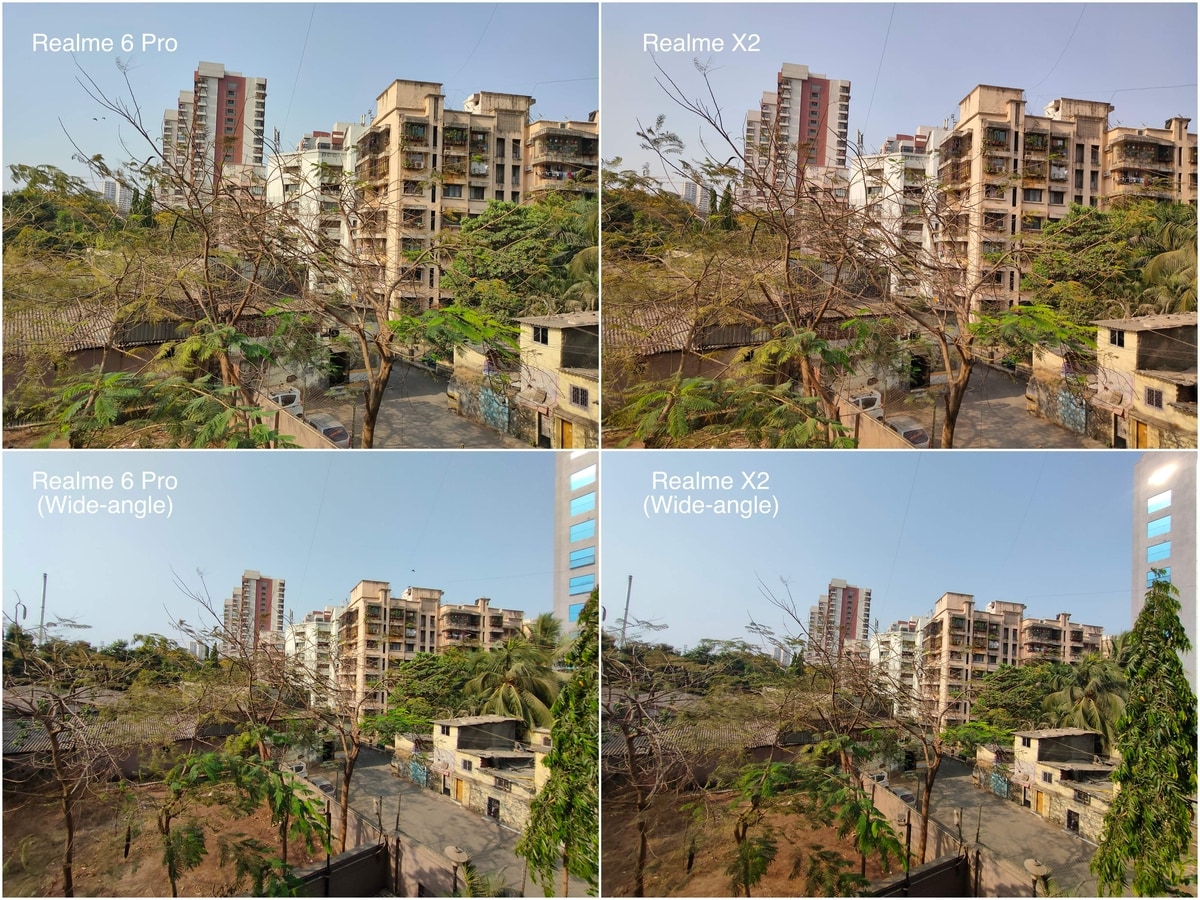 Under good light, the Realme 6 Pro and the X2’s primary cameras capture nearly identical images. The colour tone is a bit warmer on the Realme X2, while the 6 Pro has a more neutral tone, but both capture very good details and colours. The wide-angle cameras are useful and both phones perform virtually identically here. Close-ups look good, with pleasing depth of field, good details, and rich colours. When it comes to extreme close-ups, we found the 6 Pro’s macro camera to do a much better job than the macro camera in the X2. 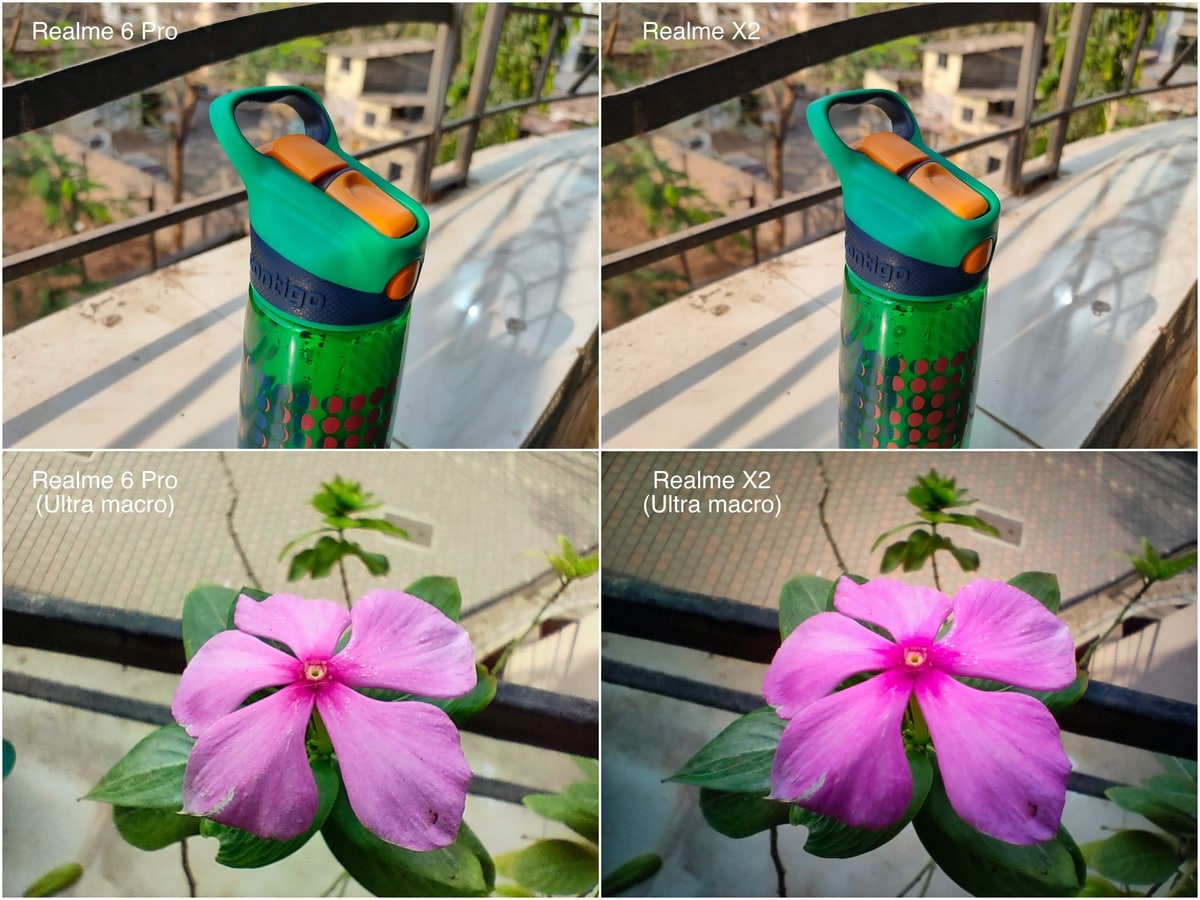 The Realme 6 Pro also has a telephoto camera, and at 2x optical zoom, it captures much better details than the X2’s digital zoom. The X2’s zoom slider only goes up to 10x, while on the 6 Pro, the 5x zoom level offers similar magnification. There’s a clear distinction between the two photos, with the 6 Pro offering a sharper and more vivid image. The Realme 6 Pro lets you zoom in up to 20x, which still results in decent-looking shots under good light. 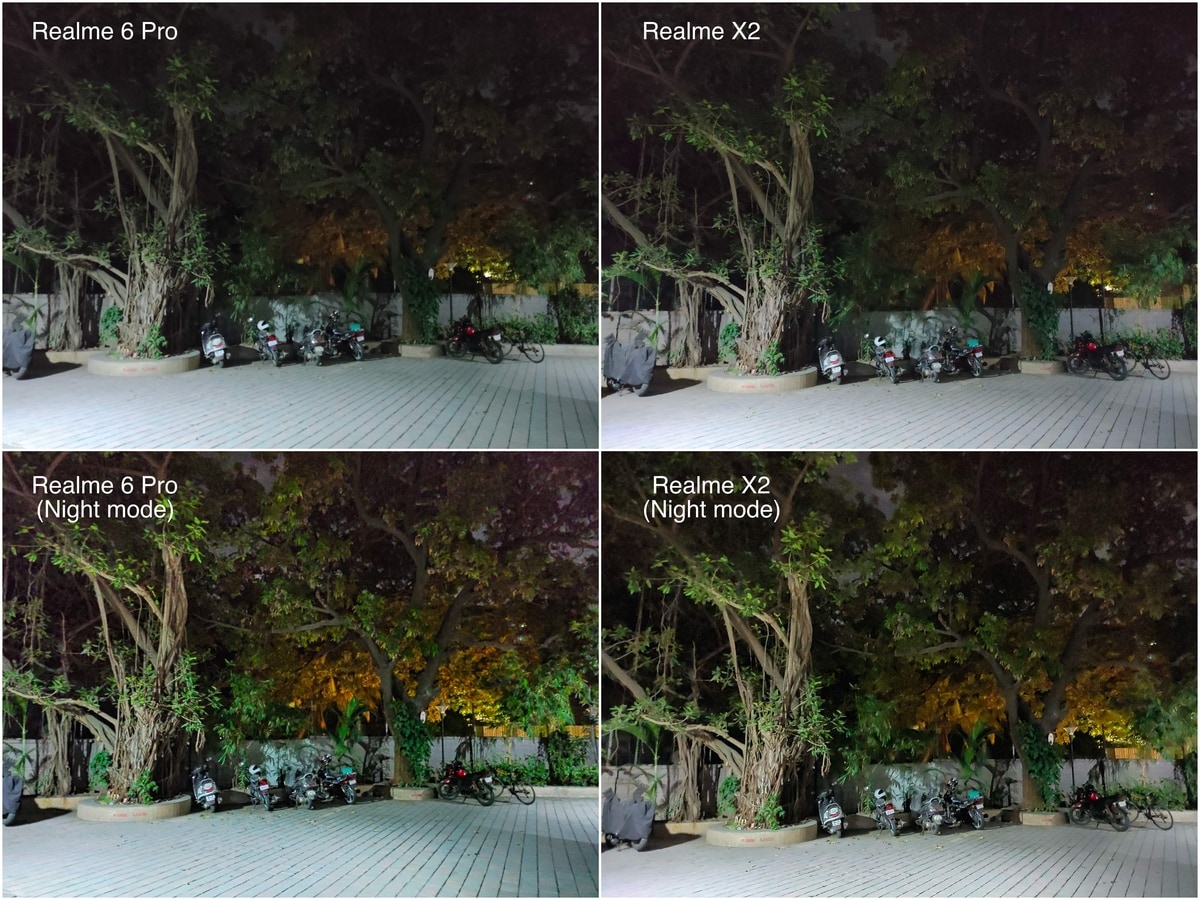 In low light, both phones struggle to lock focus and details aren’t very good. Night mode helps brighten the image and here, we found the 6 Pro to produce slightly better colours. The wide-angle cameras of both phones fail to deliver pleasing results in low light, but with Night mode, both do improve slightly.

We finally come to videos. The Realme X2 and the 6 Pro are both capable of 4K video recording. Image quality is decent, although colours do look a little overstated. You can zoom in but you can’t switch to the wide-angle camera while recording. We recommend using the wide-angle cameras only if you need a wider perspective, as it only records at 1080p and the quality is not very good on either phone.

The Realme 6 Pro ships with Realme UI 1.0 based on Android 10, out of the box. Meanwhile, the Realme X2 was recently updated to Android 10, so both phones are now equal when it comes to software. Realme UI adds a cleaner look and feel to ColorOS and is similar to stock Android. You still get all the customisations and features of ColorOS, such as Game Space for optimising the performance of games, a system-wide dark mode, screen recording, etc.

The Realme X2 was, and still is, a very solid performer. Not too long ago, it was one of the most powerful smartphones you could buy for under Rs. 20,000. However, with the introduction of the Realme 6 Pro, we think it makes good sense to pick this one instead. It isn’t a clear-cut winner because it doesn’t have an AMOLED display, which is something we prefer about the X2. However, other than that, the 6 Pro is either equal to or better than the X2 in pretty much every way. It has a slightly bigger battery, a more premium look, more useful secondary cameras for the rear, and front and a more modern processor.